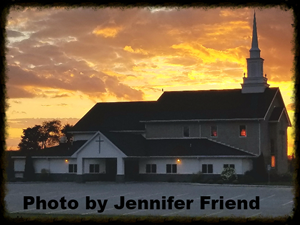 Many times throughout history of this small church, the pulpit was filled by pastors who also served another area church. In 1944, Bethlehem yoked with Bethel United Church of Christ in the Town of Herman, Sheboygan County. The congregations shared a pastor until 2002 when each church had grown in numbers and it was felt the mission of the congregations would be better served with its own pastor.

We have had two building expansions, the second building with numerous additions, renovations, remodeling and redecorating served the congregation until 2005. Our current facility is built on a 15-acre parcel just north of the original site. In January 2006, the first worship service was held in the new handicap accessible church. The new building is double the footage, allowing a large sanctuary, separate rooms for Sunday School classes, choir, youth, library, pastor's office, spacious kitchen and fellowship hall.

Our members are business owners, teachers, bookkeepers, salespeople, factory workers, office workers, truck drivers, retirees, and even a few farmers. There is a mix of age groups from infants to octogenarians. Many families are new to Bethlehem and the United Church of Christ, while others have family ties that go back six generations to the church founders in 1865. Special services throughout the year include midweek Lenten services, a Maundy Thursday Play, a Christmas Cantata, and Mission Fest.

In addition to these special services, a major fundraiser—a chili supper—necessitate and encourage cooperation, organization and involvement which serve to draw the church community together. This also allows the congregation to fulfill its mission to reach out to the people in the surrounding communities.